Legal Disclaimer: Don't swallow or chew on pieces may result in death, keep away from children. 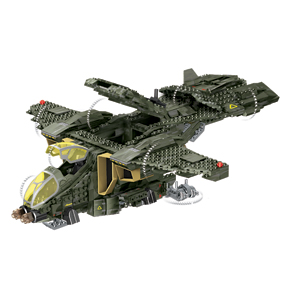 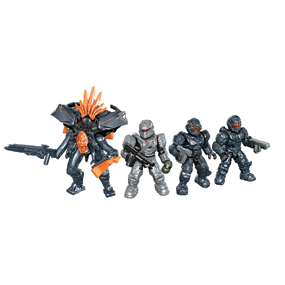 Build Your Pelican Gunship and Join the Fight

The UNSC Pelican Gunship brings lights and sounds to the Mega Bloks Halo collection for new, creative play. Use the enclosed instructions to build a highly-detailed Pelican Gunship, or channel your inner engineer and use the more than 1,100 pieces to build your own epic UNSC vehicle.

Prepare for battle as you secure your Spartans into the dual cockpit and side-mounted machine gun turret. Load the weapons racks and hit the action button to activate the Pelican lights and sounds as you take off into hostile territory.

Features for Halo Fans of All Ages

The UNSC Pelican Gunship has cool light features and five authentic in-game sounds giving fans of all ages an all-new immersive play and display experience. Press the button and maneuver the vehicle to activate a sequence of sounds including battle take-off, target explosion and cannon firing. The UNSC Pelican Gunship includes a series of cool features like dual opening cockpits, a hangar bay with opening hatch for interior play, hidden weapon compartments and a transport hook that adapts to both the Mega Bloks Halo UNSC Night Ops Gausshog and the UNSC Mantis for expanded play. The UNSC Pelican Gunship set comes with four Micro Action Figures including three fully articulated UNSC Spartans and an all-new light-up Promethean Knight Battlewagon that reveals a glowing humanoid skull.

What's in the Box?